The Supreme Court has rejected challenges to assault weapons bans in Connecticut and New York, in the aftermath of the shooting attack on a gay nightclub in Orlando, Florida, that left 50 people dead.

The justices on Monday left in place a lower court ruling that upheld laws that were passed in response to another mass shooting involving a semi-automatic weapon, the elementary school attack in Newtown, Connecticut.

The Supreme Court has repeatedly turned away challenges to gun restrictions since two landmark decisions that spelled out the right to a handgun to defend one’s own home.

In December, less than a month after a mass shooting in San Bernardino, California, Justices Clarence Thomas and Antonin Scalia dissented when the court refused to hear an appeal to overturn a Chicago suburb’s ban on assault weapons. Scalia died in February. 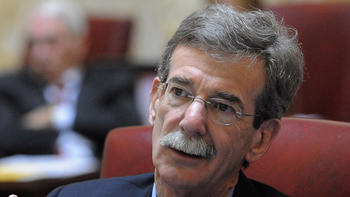 Seven states and the District of Columbia have enacted laws banning assault weapons. The others are California, Hawaii, Maryland, Massachusetts and New Jersey, according to the Law Center to Prevent Gun Violence. In addition, Minnesota and Virginia regulate assault weapons, the center said.

Connecticut and New York enacted bans on assault weapons and large-capacity magazines in response to the December 2012 massacre of 20 children and six educators at theSandy Hook Elementary School in Newtown, Connecticut. The gunman,Adam Lanza, shot and killed his mother before driving to the school where he gunned down the victims with a Bushmaster AR-15 rifle. Lanza then killed himself. 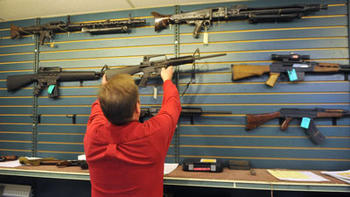 Maryland’s assault weapons ban is under review by different circuit, and the Supreme Court’s decision Monday not to review New York and Connecticut’s ban doesn’t have legal bearing on Maryland’s case, experts said.

When he was a state senator, Maryland Attorney General Brian E. Frosh was a chief architect of Maryland’s assault weapons ban and ushered its passage through the Senate.

On Monday, he said in a statement that military-style assault rifles are “the weapons of choice for mass murderers. We are pleased with the Supreme Court’s decision not to review further the challenges to the bans in our sister states on the sale of assault weapons and large capacity magazines.”

Vincent DeMarco, board chair for Marylanders To Prevent Gun Violence, said the decision “bodes well for the ultimate affirmation” of Maryland’s law.

The U.S. Court of Appeals for the Fourth Circuit is weighing whether lower courts used the right level of scrutiny when deciding to uphold Maryland’s law, which was passed in 2014 after the Newtown shooting.

Jan Vernick, a lawyer and co-director of the Johns Hopkins Center for Gun Policy and Research, said that although Monday’s decision has “very little bearing” on the legal fate of Maryland’s gun ban, he it could have a psychological effect on the judges considering Maryland’s case.

In Orlando, gunman Omar Mateen used a Sig Sauer MCX semi-automatic rifle and a pistol during the attack at Pulse nightclub. Mateen was killed in a shootout with police after killing 49 others.